This month TPP presents the new limited edition silkscreen print by world renown urban and graffiti artist Ismo. After blowing up the streets with his now infamous toaster and other tags of political and social content and mixing his works with the icons and images of pop culture, he has become one of the most important graffiti artists in the Island.


Ismo which translates into Ism in English took his name from the suffix of the different movements of art hence Cubism, Modernism, Futurism and Minimalism among others with the intention of just creating his own art movement by simply using the suffix Ism.


In this work Ismo presents his newest appropriation of an iconic logo, which by intervening it he makes it his own and automatically becomes a work of art. As before him Richard Prince has done with his Marlboro cigarette ads and lately his edition of the classic American novel The Catcher in the Rye by JD Slazenger, Prince reprinted the novel exactly the same with the only difference that he printed the dust jacket with the name Richard Prince instead of the actual author. This will most definitively end up in court for copyright where Prince has already lost a battle, just as Shepard Fairey aka OBEY lost his battle with the HOPE poster from the Obama photograph from the Associated Press that ended up in a settlement. 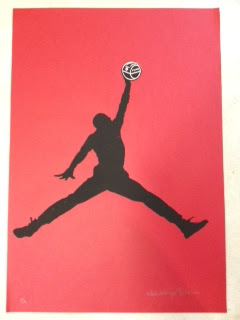 In this print, Ismo has taken a logo similar to that of Air Jordan and he intervened it with his trademark 1950’s toaster in the hand of Jordan instead of the basketball that goes in that hand in the original logo. This is not the first time this well-known logo has been used in the art world as Hank William Thomas used this logo where he had the original logo and another logo jumping right behind it with a gun in place of the basketball. Since Michael Jordan is the most famous athlete in the World, artists in the urban scene and tend to use it because of the familiarity and power it has among the Afro-American demographics.


Throughout his career has appropriated logos of local companies and public figures such as Mama Aime, Don Cholito, Carlos Arroyo and other making his art appealing to a wider crowd of people who can understand his works because they feel familiarized with the theme as they will definitively feel familiarized with this print due to Puerto Rico’s heavy fan base of basketball and the appeal of this internationally known logo.


Ismo is a remarkable graphic artist whom instead of computers uses walls across the Island to show his works. His appropriations are necessary to help criticize local products and make art understandable and comfortable to regular Joe’s who would never actually step into a Museum. His work is necessary so everyone can enjoy art around the city.


This image will be used in a mural in a non-profit community project this summer. We will post images of the process and document the creative process of the mural.


Remember only 50 signed and numbered just $50. Get yours today.
Posted by trailerparkproyects at 7:20 PM