This next November 8th starting at 7;00pm, TPP presents "Dusk Drawings" a solo exhibition of artist Max Razdow. Our Trailer will be stationed in the parking of Galería Roberto Paradise at Calle Hipódromo #610 in Santurce. Live Music will be by La Bean, underground scene band who is currently promoting their first CD release. Artist Jesus "Bubu" Negron will be doing his famous back-portraits for only $20 (per figure).

“Dusk Drawings” introduces a new set of drafted constellations, devised in half light over the last two years by New York artist Max Razdow. The show is based on a series of eight immediate pen drawings on folded paper, which were made by Razdow while camping on Saint John’s Island in 2011. Particularly evident in these works is a collapse of the natural and interior world, proposing a hybridized human (becoming animals, plants) as participant and medium for the exchange. 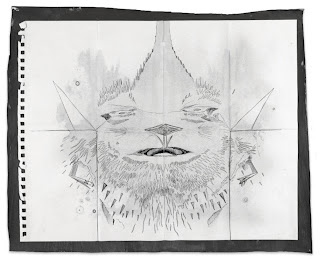 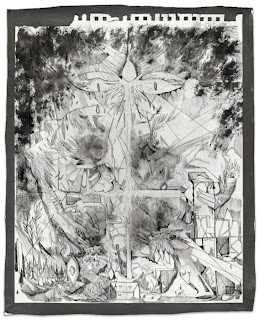 The eight Saint John’s works are accompanied by larger color ink drawings, which present mysterious allegorical landscapes elaborating on these themes. “The Arrival of the Cat Mask” depicts a giant composed of machine parts and human appendages, holding out a cat’s mask as he plods into the lush foothills before an erupting volcano. In “Game Players,” a half metal pair of figures play out an epic drama on a digital chess board. The figures are observed by the eye of a looming and distant invertebrate that lurks in the inky space where they play their game. In “Shell Sky,” an island is depicted which warps the air in a spiral manner, transitioning space from complex forests of nested symbols, through a hermit’s transitory bay, and finally to an open ocean of churning regularity. 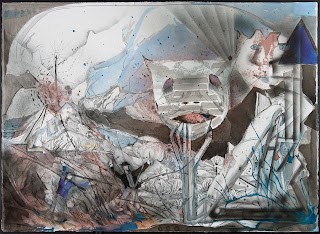 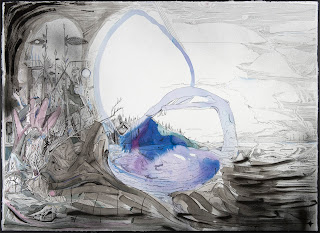 Also included in the show are the “Dusk Drawings” of the exhibition’s title. These are free-standing ink and metal leaf constructions on mounted paper, depicting double figures, each with an individual, poetic statement to make. Their poems are scrawled in sand as the figures gaze into the implied early night sky for the show’s newly authored astrologies. Further text, star maps and a cat’s paw sculpture are also included in the exhibition. 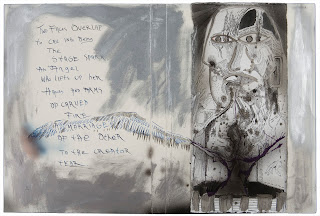 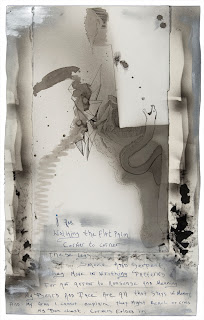 Razdow lives and works in NYC, he recieved his MFA from  NYU. He is represented by Gallery Jan Dhaese (www.jandhaese.be) in Belgium and Freight and Volumen (www.freightandvolume.com) in NYC.This is his third solo show and his first time exhibiting in Puerto Rico. To learn more about his works you can visit his website (www.razdow.org).
You can LIKE our Facebook page and search for the photo folder named Max Razdow which contains all works in the exhibition.
See you Nov. 8th.
Posted by trailerparkproyects at 9:40 AM