This month (March 2012, still running behind schedule) limited edition silkscreen was designed by NYC based urban artist Rimx. He is part of the collective group Corografico alongside artists Clandestino, Spear, Acty2, Son and Esco.  The Corografico was named winners of the collective category in the 1st Urban and Street Art Biennale Graphopoli with their mural work on the Coliseito Pedrin Zorrila in Hato Rey.


Rimx who graduated from Central High and studied at La Escuela de Artes Plasticas in San Juan, has created his own world of characters which he routinely places in walls as part of murals around the city. Rimx has incorporated some new elements to his already elaborate works using the architectural influences he sees in different cities where he works.


This particular character has been named “Caradura”, meaning hard-face.  In this design we can appreciate the architectural form of the “adoquines” which is the name of the stones that make the streets of old San Juan. This element helps make this specific character more regional or local as he has the land mark streets of the capital of Puerto Rico in his face. 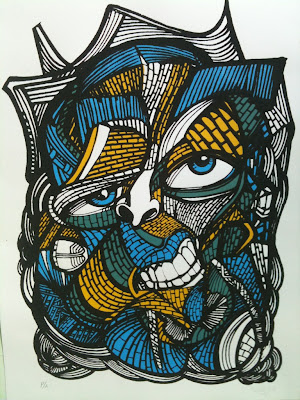 Rimx is an ever evolving artist whom is continuously experimenting and adding new styles into his already recognizable artwork always looking for that new way to impress his fans and bring his work to new heights and letting us into his world of characters whom you can see come alive in his works.


This is a limited edition silkscreen numbered to 50 and hand signed by the artist. Cariduro is only $50 per silkscreen until supplies last. Get yours today.
Posted by trailerparkproyects at 1:42 AM