On Monday we will be launching (a bit late) the new silkscreen limited edition print of TPP. Young emerging artist Bobby Cruz has been a very active in the art scene in the past years with 2 solo exhibitions, a participation in Scope Miami and various street art projects.

The limited edition silkscreen is a Puerto Rico national team basketball jersey with the number 1. Cruz has been doing a public art project where he has pasted mosaic jersey of different players from the Puerto rico National BasketballTeam and puertorricans whom have played over the years in the NBA. For the event at Tras Talleres in Santurce he placed a mosaic Jersey of Jose Juan Barea whom a the time was playing in the NBA finals and getting a lot of media attention. Later that month he placed a Piculin Ortiz Jersey for the Urban event Santurce es Ley 3.

This sparked a interest in these pieces and eventually he presented a series of jersey at his solo show in Galeria Yemaya. Since then there has been a demand for the mosaics but we at TPP along with Bobby have produced a 3 color silkscreen so everyone can have one. 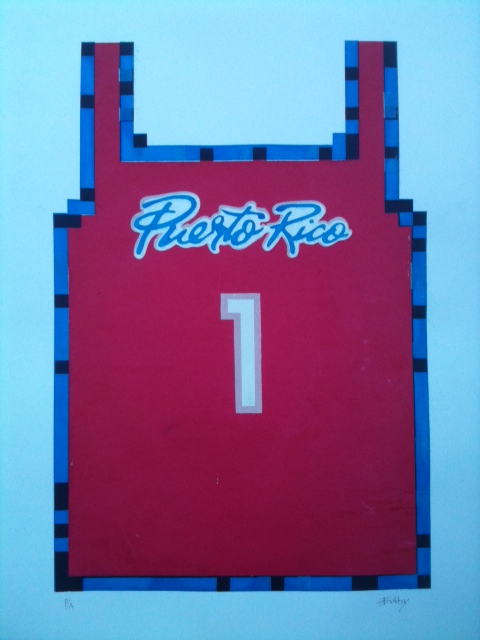 This is a jersey of the team that won the Panamerican games and coincidently finished number 1 with a Gold Medal. Bobby's work has been long associated with popular culture with his series of Bikes, Tennis shoes, Basketballs, Salsa Records front cover artwork and vintage cars. This work is a hommage to his love of the sport and respect to all the member of the National Team who represent our flag and people with pride and dignity.

Don't miss the opportunity to own this beautiful limited edition silkscreen for only $50. Only 40 left of the edition of 50. All are hand signed by the artist and numbered.
Posted by trailerparkproyects at 10:13 PM No comments: